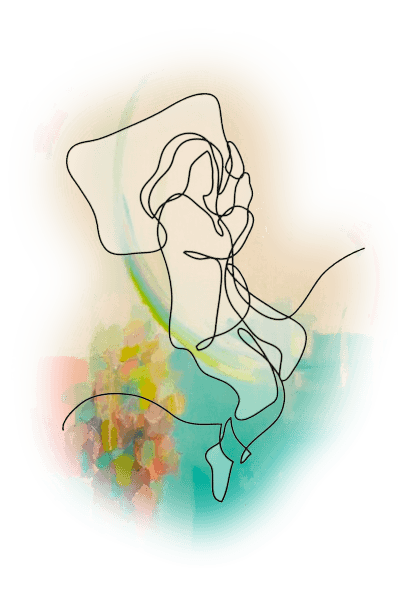 World Sleep Day is held the Friday before Spring Vernal Equinox of each year. This year, the Equinox falls on 18 March, 2022. It is a call to action on important issues related to sleep. The slogan of World Sleep Day is “Better Sleep, Better Life, Better Planet”. Sri Aurobindo says, ‘…sleep is necessary for the body just as food is. Sufficient sleep must be taken, but no excessive sleep.  What sufficient sleep is depends on the need of the body.” This article is a compilation of the Mother’s thoughts on Sleep – The Supreme Rest

There is a genius within every one of us – we don’t know it. We must find the way to make it come out – but it is there sleeping, it asks for nothing better than to manifest; we must open the door to it.

Through the Prison Reformation initiative, natural and organic farming were initiated in the Central Prison of Pondicherry on 14 March, 2022. Around 10,000 pineapples, 40 varieties of bananas, turmeric and ginger were sown as part of this initiative. Prisoners working in this organic farming are paid Rs. 200 as their daily wages which will be utilized for the welfare of their family members.

SARVAM conducted numerous activities this fortnight which kept the children and women engaged and happy. Certificates were awarded to digital sakhis who completed their financial literacy successfully; indeed a proud moment for them. English Access students were taken for a one-day trip to Gangaikonda Chozhapuram by SARVAM’s teachers and coordinators. Women’s Day was also celebrated which made all the women feel great.

Mark your calendars for two exciting discussions. The first is on 19 March, 2022 (Saturday) where the Special Guest Speaker is Dr. Larry Seidlitz, who will make us experience the Living Force and Power of the Words of Sri Aurobindo and the Mother through a discussion on ‘Integral Yoga at Work’. You can join this session via Zoom from 11:00 AM to 12:00 noon. The second to be held on 27 March, 2022 (Sunday) is a Special Lecture by Dr. Charan Singh Kedarkhandi on the theme – India, Our Mother on the topic: ‘Veera Rasa in Sri Aurobindo's Savitri’. This too will be brought to you via Zoom from 11:00 a.m. to 12:00 Noon.

Waking up from the Slumber

We need to wake up from our sleep. Most of us are unaware of how dormant our waking state actually is. To live in your true self is conscious and this online workshop from 6–9 April, 2022, aims to show you how to separate dream from reality and truly wake up. Join Dr. Monica Gulati to discover a totally new dimension to living!

Svarnim to bring to light sporting talents of children

As part of the DST (Department of Science and Technology) School Health Action Project, sports kits were distributed to 10 government schools to enhance physical education and sports activities among the government school children. Meanwhile, the first harvest planted by Svarnim team on the terrace garden of the Society House was a delight to watch. There was an abundant of freshly grown greens with chemical-free fertilizers. 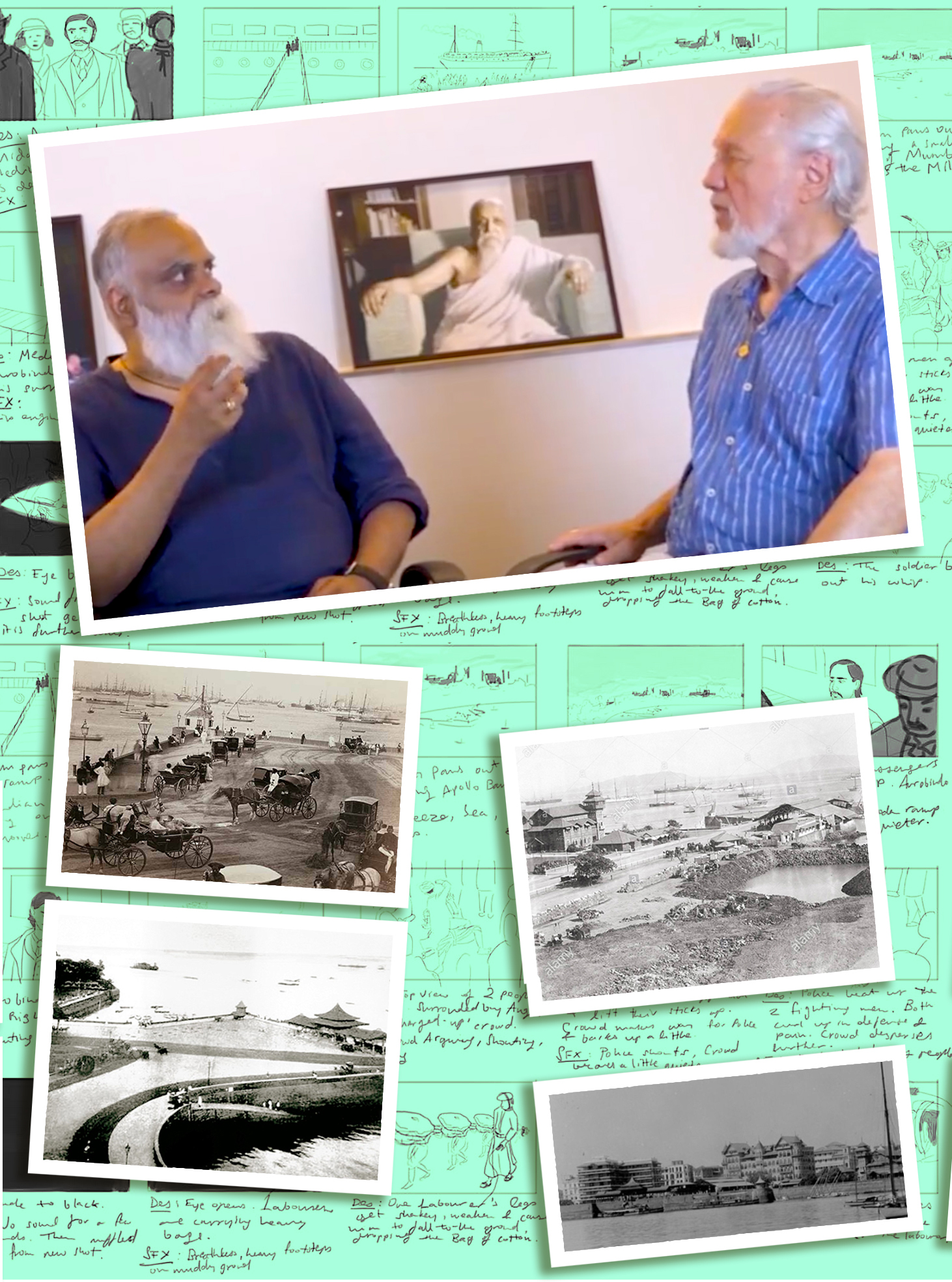 An animation film ‘Sri Aurobindo: A New Dawn’ is being made by Sri Aurobindo Society, to inspire the
youth of India and the world through the story of Sri Aurobindo and his immense contribution to the renaissance of India, as its offering for the 150th year of Sri Aurobindo’s birth.

The film is at present in its scriptwriting stage. The kernel of the script emerged during several discussions held in Puducherry between the Production team from Mumbai and the Project team at Puducherry, along with several long-time followers of Sri Aurobindo.

Here are some short video-excerpts from the discussions:

Watch Suresh Eriyat, the founder and creative director of Studio Eeksaurus talk about Why We have chosen Animation as a Medium.

To know about the Approach to the Film, click here!

The Path Forward describes how the Production team is going to proceed further.

Join hands in the making of this film! Donate. 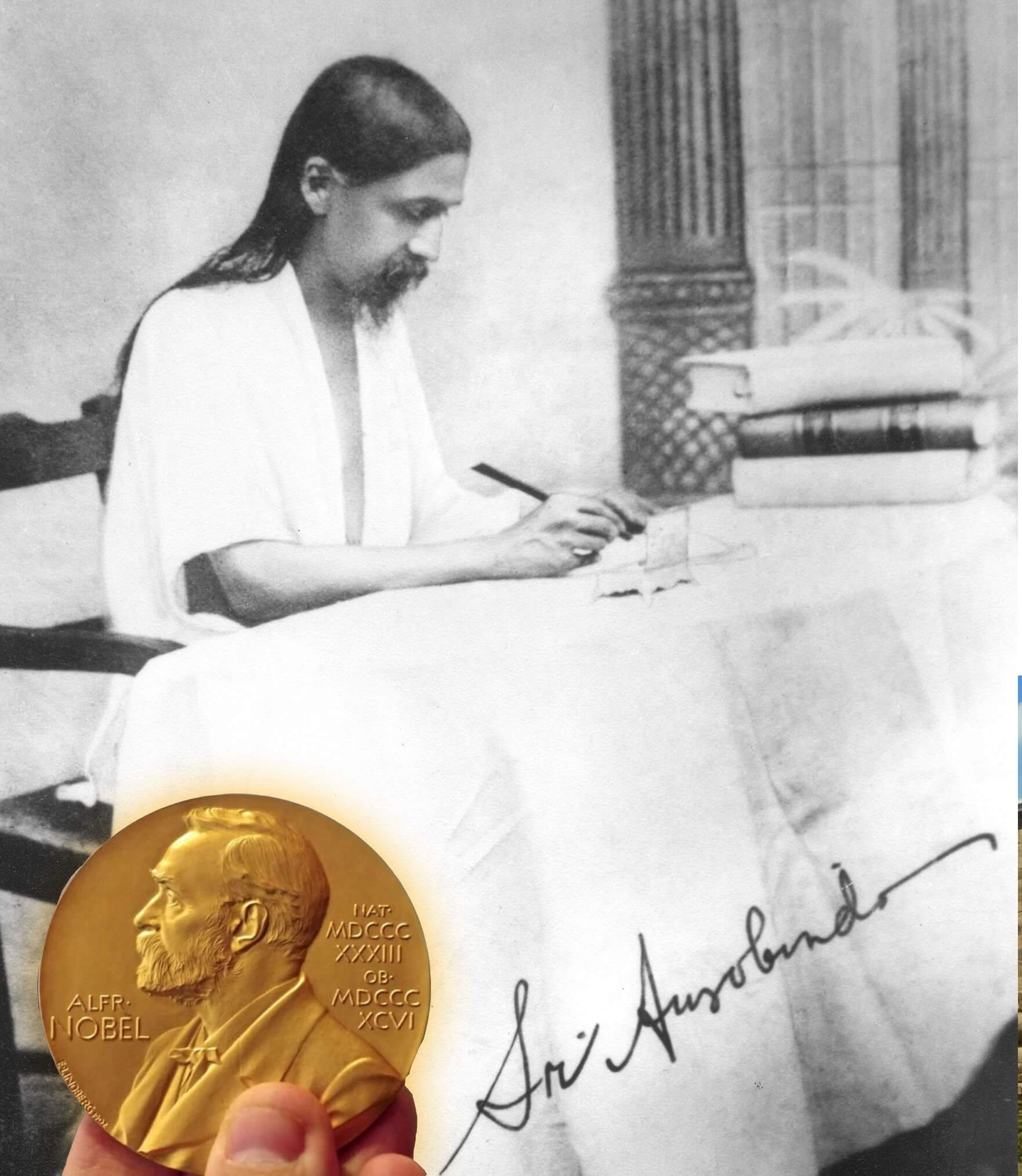 We stepped into a significant year on 15 August 2021 as it starts the 150th birth anniversary of Sri Aurobindo and the 75th year of India’s independence. This section is our humble offering to this momentous occasion. We will bring a few golden glimpses from the Master’s avataric life as well as a few glorious achievements of independent India.

Very few are aware that Sri Aurobindo was nominated for the Nobel Prize twice – in 1943 and in 1950.

In 1950, Madame Gabriela Mistral, a Nobel laureate herself from Chile, proposed the name of Sri Aurobindo for the Nobel Prize for Literature. She was seconded by Miss Pearl S. Buck, another Nobel laureate hailing from America. The nomination was supported through a letter, signed by 36 eminent intellectuals from India.

Excerpts from the letter, addressed to The President, Svenska Akademia, Stockholm, Sweden – written in 1949:

‘…Through his writings he has revealed to us once again the pathway of experiencing the Real and the Eternal.

… Poetry has become, in Aurobindo’s hands, an instrument for articulating the celestial music, the ecstasy of the Infinite…

… Sri Aurobindo’s profound and penetrating analysis of the fundamentals of Indian Culture and his vision of India’s glorious destiny of being the meeting place of the best of the East and West have awakened us to the opulent spiritual heritage that belongs to us and the part that India has to play in the destiny of mankind.’

Shivakumar, the poet, is a practitioner of Integral Yoga since his college days and loves to express himself through poetry whenever they visit him and insist on expressing themselves! For the last couple of decades, he is engaged with the educational and youth-related activities at Sri Aurobindo Society, Puducherry.

The poet here gets a glimpse of the Source of all things beautiful and is enamoured of it. His earning for this Source – what in Sanskrit is described as Satyam, Shivam, Sundaram – is expressed in the poem below. 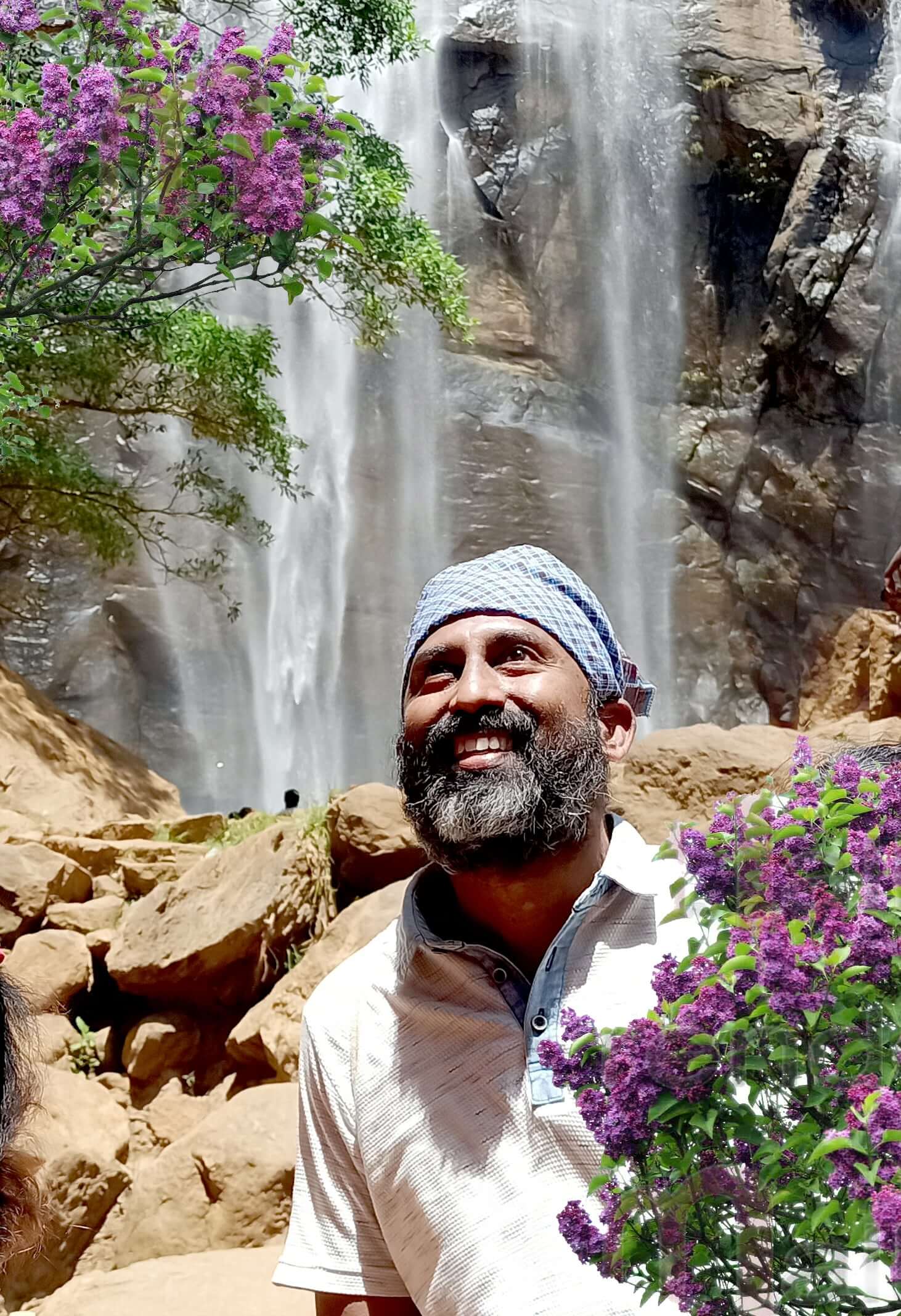 THE MOST BEAUTIFUL THING IN THE WORLD

The most beautiful thing in the world
Is that yearning heart that burns like a shadowless light—
A heart that beats only for an echo from You
In the myriad emptinesses that walk all around.

In every tick of time, it hears Your intoxicant foot-steps,
In every blow of the breeze, Your caressing breath, inebriate.
In the fleeting thoughts that invade it, of You,
Tidal waves of bliss crash through.

Agony is when You choose to hide Yourself
In the heart’s depths where it cannot plunge for long;
Nor can the heart stay too close to You
Lest it be too rapturous for its frail beats.

In all that denies You, You get more affirmed;
In a world of passing dreams, You are its sole Reality!

Elections and their results all over the media, tiring and irritating – is it not? Now, let’s take a break from this and enjoy some political humour.

A thief stuck a pistol in a man’s ribs and said, “Give me your money.” The gentleman, shocked by the sudden attack, said: “You cannot do this, I’m a Minister!” The thief said, “In that case, give me my money!”

Now that the pandemic is almost at its end, companies have started calling back their employees to work from their offices.  Economically and socially this is a good start, but people who have got used to working from home such as young mothers may find it difficult to adapt themselves to this change.  Almost all of them are used to taking a nap when they were working from home and if offices are open, this would not be possible.  But a study says that a nap while at work increases the productivity of employees.  So why not try that out? 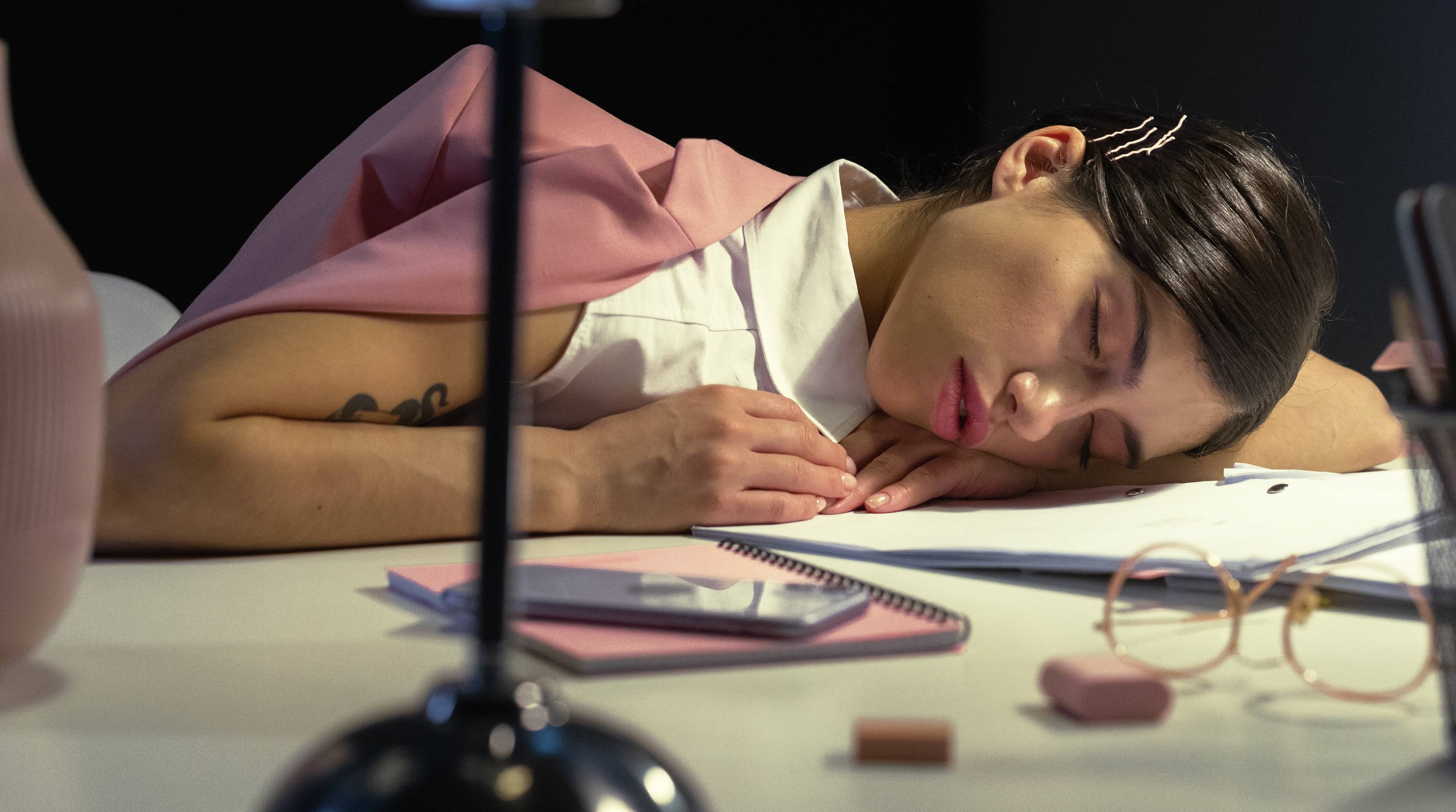